The Middle School Shakespeare workshop is place where students are given the opportunity to work with the text of Shakespeare, but with their own leadership. The students watch videos of famous Shakespeare performances and engage in deep scene analysis. The workshop is open to any 7th and 8th grade student. Past Shakespeare Workshop performances include: Comedy of Errors, Romeo and Juliet and Twelfth Night.

On November 2, 2018 the Middle School Shakespeare workshop performed monologues and scenes from various Shakespeare plays, calling their show: All The World’s A Stage. The title which derived from the first monologue that was performed from Act II, Scene VII of Comedy of Errors. Monologues were performed from As You Like It, A Midsummer Night’s Dream and The Tempest. Scenes from Macbeth, A Midsummer Night’s Dream, Twelfth Night and Romeo and Juliet were performed.
Before every monologue and scene, an actor was put under the spotlight and gave the audience the context of the play. Thus the scene would begin under a light that would match the mood of the play. The costumes thematically matched the performances, which the entire company of the production took part in choosing. This was exemplified in the scenes from Macbeth, where the costumes of the three witches perfectly matched the lighting and mood of the scene. This allowed to elevate the performance and make the audience feel like they were no longer sitting in The St. Jean’s Theatre, but in an other worldly place where witches could roam. In addition to choosing the costumes, the cast chose the props and music for the production, a feat easier said than done. The play was performed in one act with no intermission and lasted approximately 50 minutes. 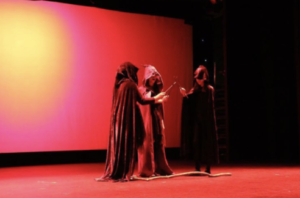 It was obvious from the performance that every actress gave it her all and that care went into understanding the language of the plays. From the funny Act 1 Scene 2 performance from A Midsummer Night’s Dream, where nonsensical actors gather in a forest to rehearse a play, to the the company’s captivating performance of Puck’s last line, great care was given in the acting. The symmetry of the play was distinguished, opening with the line, “All the world’s a stage”, from As You Like It and ending with the Puck’s last line, “If we shadows have offended”, from A Midsummer Night’s Dream. The bookends of these scenes simulated for the audience the journey one would feel while watching a full production of a play, instead of monologues spliced together. Overall, the performance allowed for both the actresses and the audience to get a quick taste of Shakespeare, without being overwhelmed by the language, as is often the case with performances of Shakespeare.